Digital transformation is resulting in the deployment of more software workloads. Businesses are building or rewriting their software workloads using cloud-native architectures. Multi-cloud is becoming the new normal, as developers cherry-pick the cloud resources that best suit their needs. When applications or services run outside Azure and need access to Azure resources, they need secrets to authenticate to Azure AD. These secrets pose a security risk. Securely storing these secrets and regularly rotating them is an unnecessary developer burden. Azure AD workload identity federation removes the need for these secrets in selected scenarios. Developers can configure Azure AD workload identities to trust tokens issued by another identity provider. This blog post explores how you can access Azure resources from software workloads running in Amazon Web Services (AWS). 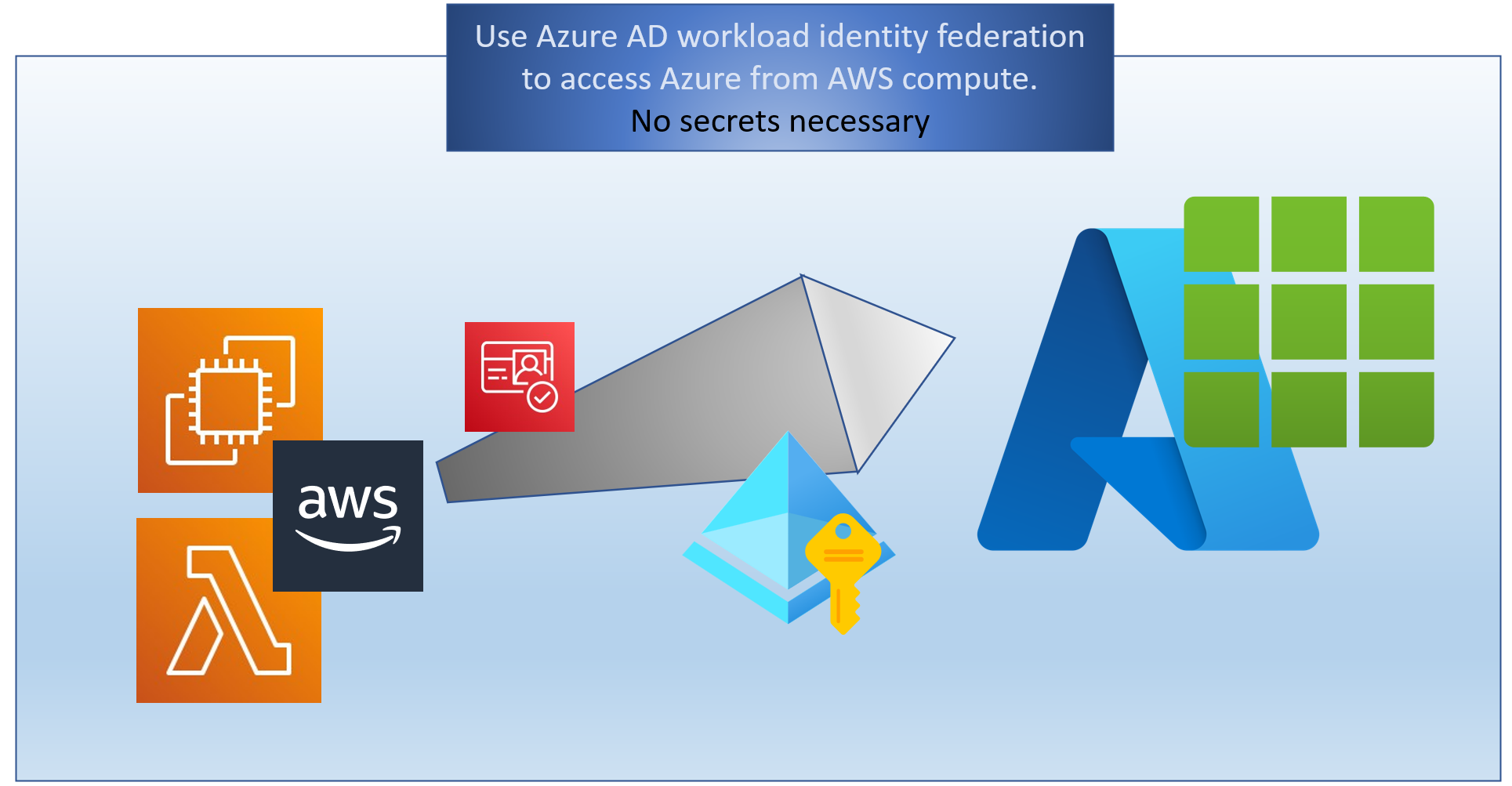 Using this pattern with AWS is not straightforward. The identity model in AWS is different from other platforms such as GCP, Kubernetes, and GitHub. While AWS IAM provides an elegant model for accessing resources within the AWS cloud, it’s not easy to use it to access resources in other cloud providers. The step-by-step guide in the first part of this blog post shows how you can use the capabilities of Amazon Cognito to federate with Azure AD. For a detailed understanding of how this works end-to-end, see the advanced topics later in this blog post.

There are three parts to using Azure AD workload identity federation from your service in AWS.

Let’s look at each of these three parts in detail.

The Amazon Cognito Identity pool is the most suited for our needs. It is necessary, for security purposes, to create a dedicated identity pool to federate with Azure AD since Cognito only issues tokens with the identity pool as the audience. See the advanced topics in the latter part of this blog post for more details on why this matters.

Create an identity pool to federate with Azure AD

In this step, we are going to create a Cognito identity pool. And set it up so that we can use identities from that pool for our software workloads. Head to the AWS console and select the Cognito service. Go to Manage Identity Pools and pick Create new identity pool. 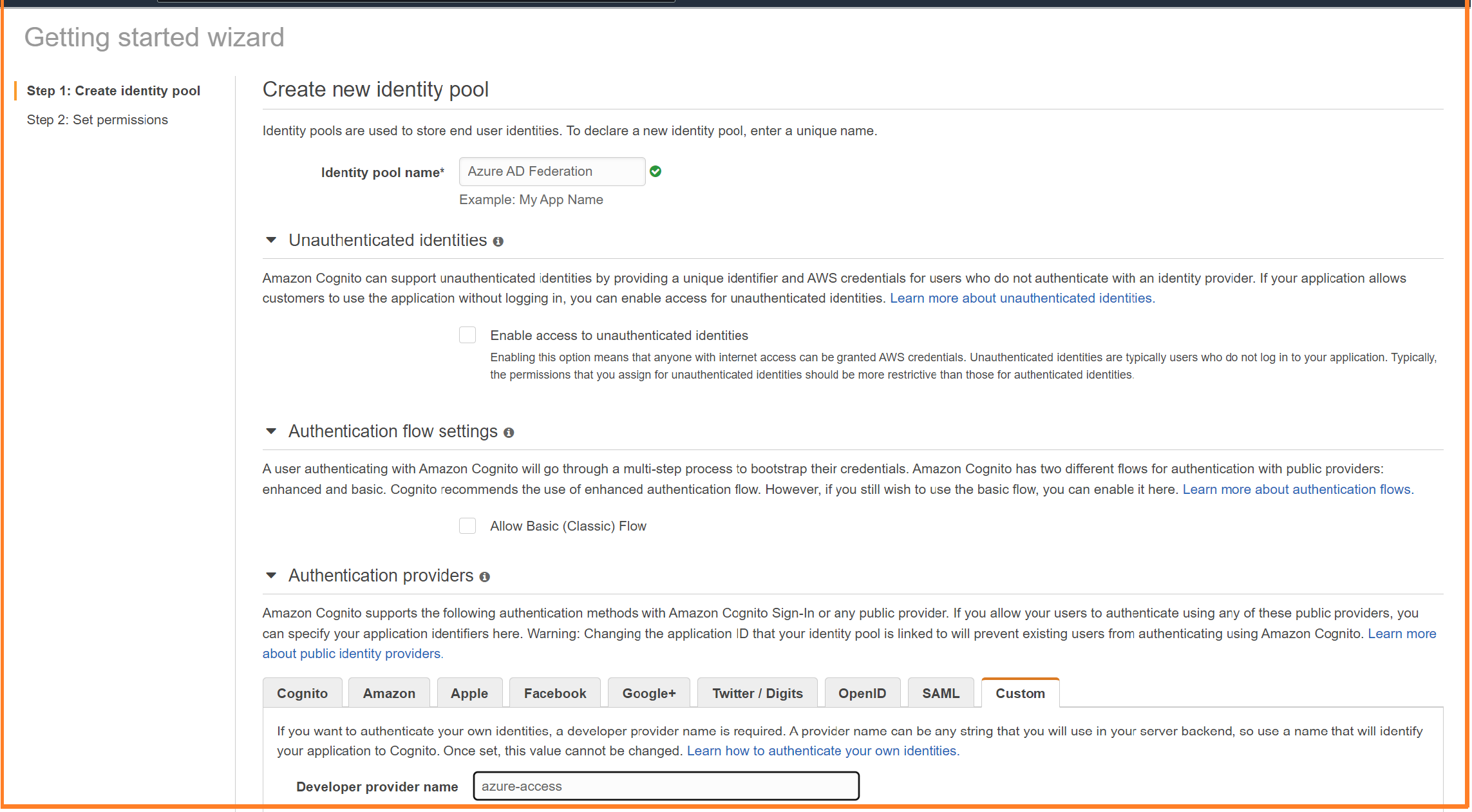 Once you create the pool, Cognito prompts you to create IAM roles. This is only necessary when you use Cognito to access AWS resources. Since this pool is dedicated to Azure, select “Cancel” to avoid creating these roles.

You will now have the id of the identity pool you just created. You can also find the Identity pool id by selecting the pool in Cognito. This selection takes you to the Cognito pool dashboard where you can see the number of Cognito identities created and their activity.

Notice the warning You have not specified roles for this identity. Click here to fix it. Since these roles are only required when you use Cognito to access AWS resources, you can ignore this warning. Selecting Edit identity pool takes you to the details of your identity pool, including the pool id.

In my case, the identity pool id is:

Create a Cognito identity for our workload

At this point, we have created a Cognito identity pool. You can now create identities in this pool to be used by your software workload. To create an identity, you can use AWS CLI with your credentials and do the following:

for example, in my case:

Note that wlid_1 is just a random string I made up for one of my workloads. Any workload authorized by me to get tokens from this pool can request tokens by providing this string. Here’s the response from the AWS CLI.

Since this is the first time the identity pool sees a request for wlid_1, it created an identity in the pool and linked it with my wlid_1 identity. Any future token request for wlid_1 will always return a token for this Cognito identity. The subject claim of the token will contain the Cognito IdentityId. In my example above, the subject claim will be us-east-1:d2237c93-e079-4eb3-964c-9c9a87c465d7

You may wonder how you will keep track of an additional set of these developer identities for your workloads. A simpler alternative is to use the client_id of the Azure AD workload identity you will use for this federation. Let’s use that approach in this walkthrough. Let’s create a Cognito identity using the client_id of our managed identity.

Here’s the response from Amazon Cognito

Azure AD has two kinds of workload identities: applications and managed identities. Both identities support federation with a token from an OIDC token issuer.

The most important parts of the federated identity credential are the following:

On success, you should expect to see something like this:

Verify you can access Azure using the Cognito token

In my case, I have granted the managed identity access to my Azure blob storage. And I can do the following to verify the setup.

On success, the response would look something like this:

Login to Azure using that token

If this succeeds, you should see a response that looks like this:

Now access the Azure resource available to the managed identity

A successful response indicates everything is working end-to-end!

Part 3: Getting a Cognito token and exchanging it for an Azure AD token

Now that we have configured an Azure AD workload identity to trust the Cognito identity, we are ready for our software workload to get a token from Cognito and exchange it for an Azure AD access token.

We will use the Amazon Cognito SDK to get Cognito tokens. Depending on where the software workload is running, EC2 or Lambda, you first need to grant the compute environment permissions to request tokens from your Cognito pool. 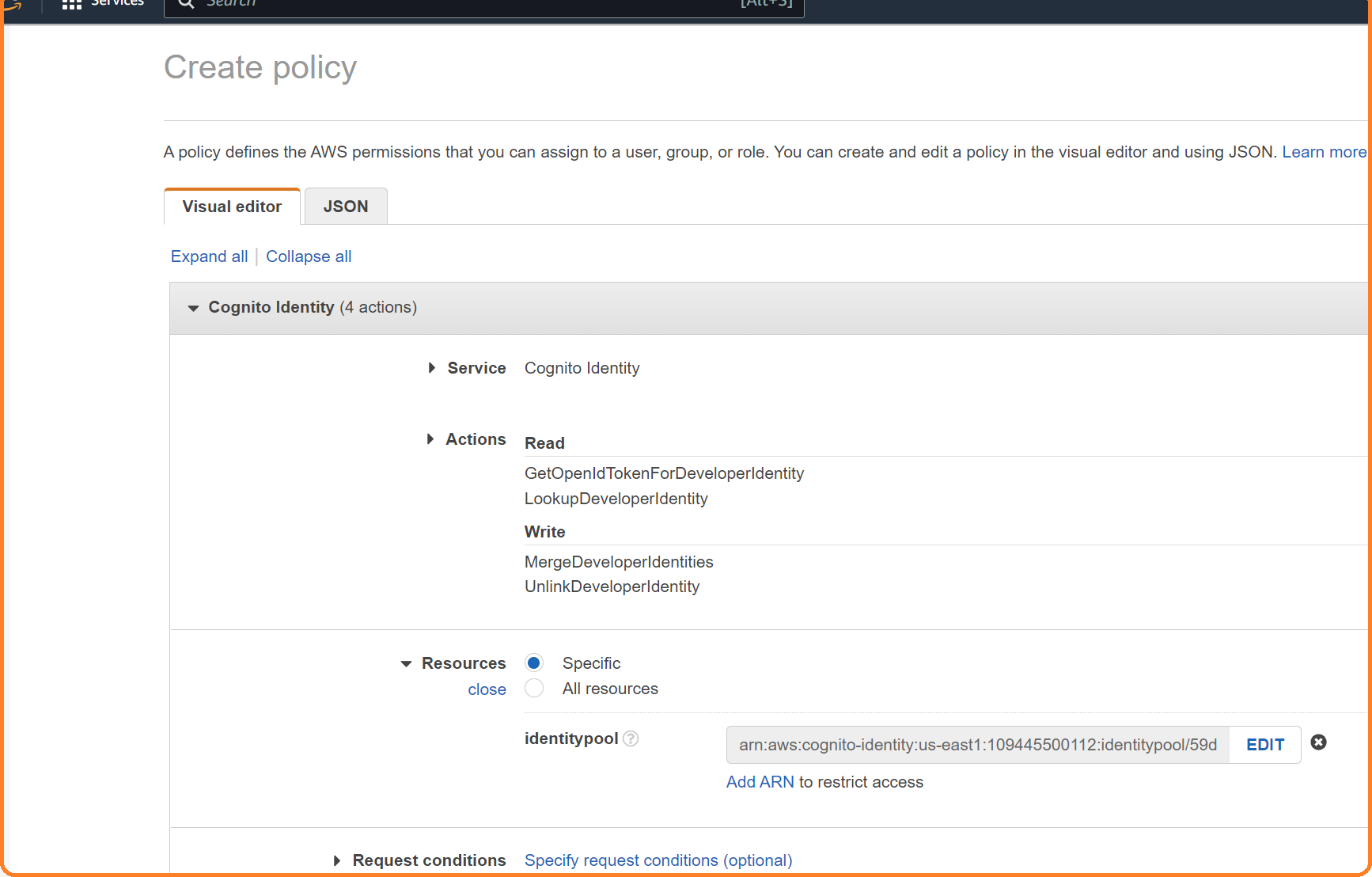 Give an appropriate name for this policy and create it. 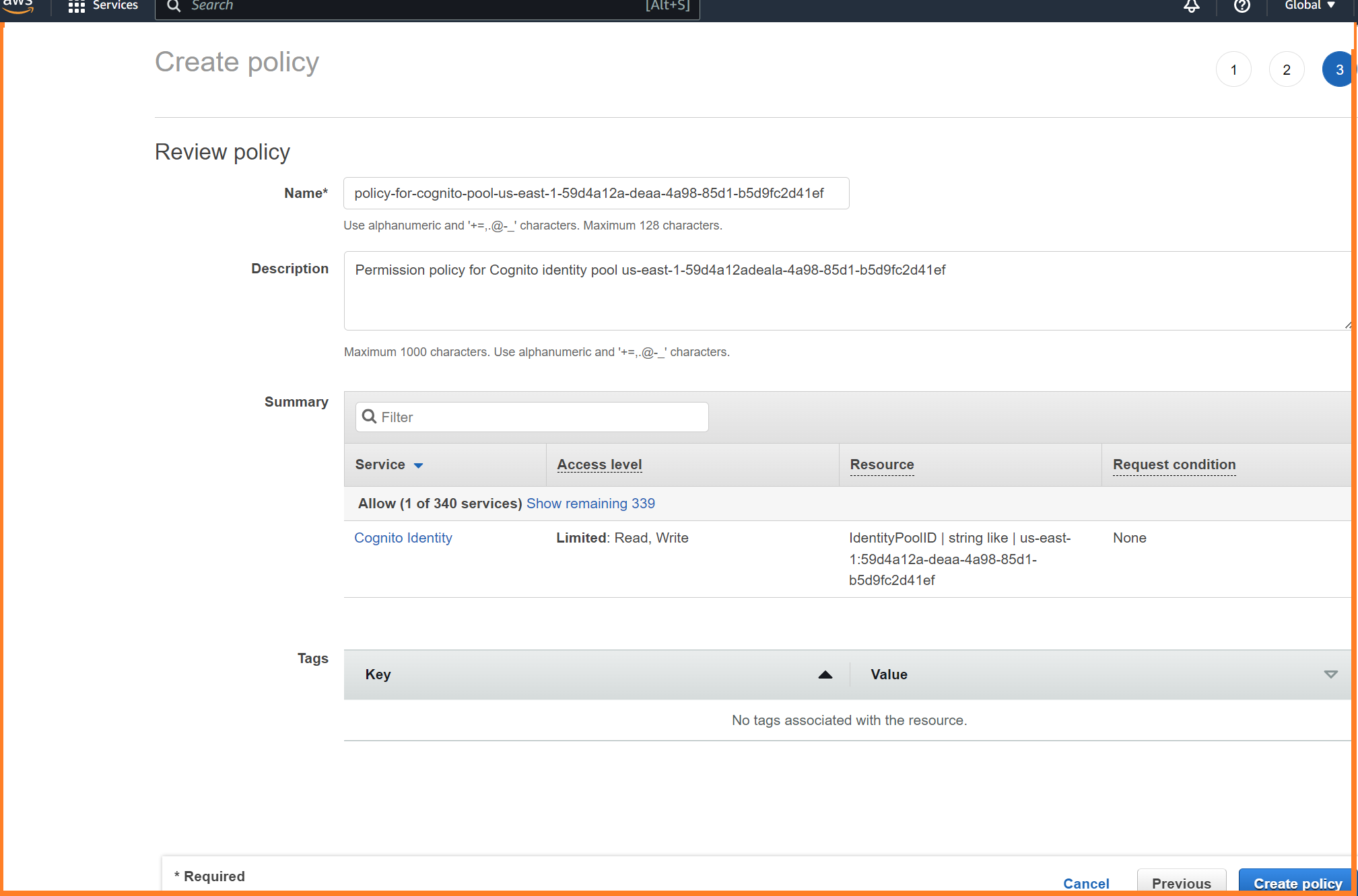 Create an EC2 role, and assign this permission policy to that role. 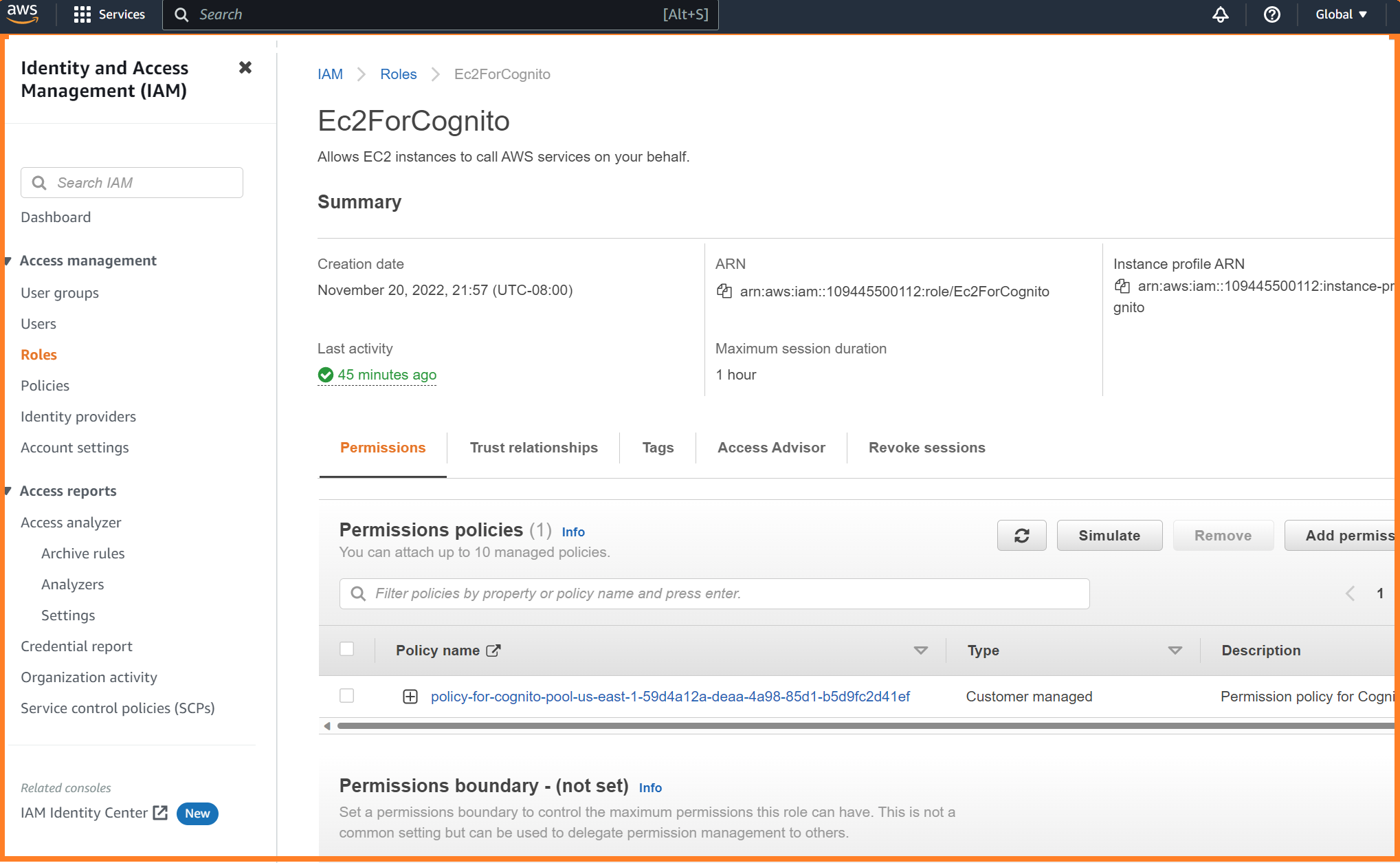 Assign this role to our EC2 instance. Any software workload running on this EC2 instance now has permission to request tokens from our Cognito pool.

Get the AWS token from your code in EC2

Use the client-cognito-identity AWS SDK to get Cognito tokens.

Use this client to get Cognito tokens.

Exchanging the identity token for an Azure AD access token

The Azure Identity SDK has added support for a new credential called ClientAssertionCredential. This credential accepts a callback function to get a federated token. I like using this credential since it simplifies the developer experience.

Here’s a sample code snippet to demonstrate this. You can see a more detailed sample in my GitHub repo

Once you have the tokenCredential, you can use this in an Azure SDK such as storage-blob.

When requests are made to the blobClient to access storage, the blobClient calls the getToken method on the ClientAssertionCredential. This call results in a request for a new token from Cognito, which then gets exchanged for an Azure AD access token. The ClientAssertionCredential takes care of caching tokens, so tokens are requested from Cognito or Azure AD only when necessary.

This ClientAssertionCredential is available in the latest shipping Azure Identity SDKs. It was introduced in these versions:

Now that we have completed the end-to-end walkthrough, let’s look at some additional details.

Using MSAL instead of AzureIdentity for getting tokens.

If your preferred SDK is Microsoft Authentication Library (MSAL), that SDK is available in the following languages and supports exchanging tokens.

My GitHub repo also has a sample using MSAL to exchange a Cognito token for an Azure AD token.

Using an Azure AD application instead of managed identity

Permissions needed to create federated credentials on an application identity

To create federated credentials on an application, you either need one of these roles:

Configuring a federated credential on an application using Azure CLI

Then create a federated identity credential on the Azure AD application

In my example, it succeeds with this message:

You can also configure the federated credentials programmatically on both applications and managed identities.

You can use the Microsoft Graph SDKs, available in several languages, to view or modify a federated identity credential. You can choose either the delegated flow or the application-only flow: make sure the service principal you use for this purpose has consent for the Application.ReadWrite.All permissions.

You can use ARM templates, Bicep, or Terraform to configure federated identity credentials on a managed identity.

AWS is different from other cloud providers when dealing with identities for software workloads. There is no native concept of a workload identity or service account. And there is no direct mechanism for an EC2 instance to request a JWT token, for example via IMDS, to authenticate to another identity provider.

My colleague, Alexander Riman, suggested that Amazon Cognito GetOpenIdTokenForDeveloperIdentity could be used to support the federation flow to access Azure resources from AWS.

This flow is also called the simplified flow. In this flow, the workload only communicates with the Cognito service and gets temporary credentials for one of the two roles in Cognito. It can access the AWS resources available to that role.

Here’s the token flow image for the enhanced flow, copied from Amazon documentation: 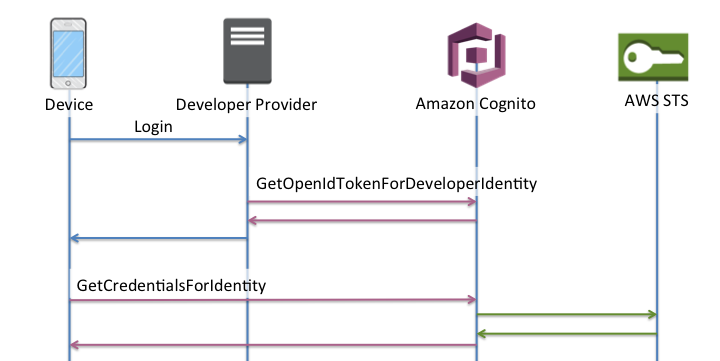 In this auth flow, you manage only two roles in Cognito. However, all your workloads get access to the same set of AWS resources available through the two roles configured for that pool.

In the basic auth flow, the software workload uses the JWT token issued by Cognito to assume an AWS IAM role.

Here’s the token flow image for the basic flow, copied from Amazon documentation:

This approach allows you to provide finer-grained access to your workloads by defining different roles in AWS IAM.

We will use a pattern similar to the basic auth flow: get a token from Cognito and then present it to Azure AD to get a token for an identity with access to Azure resources. 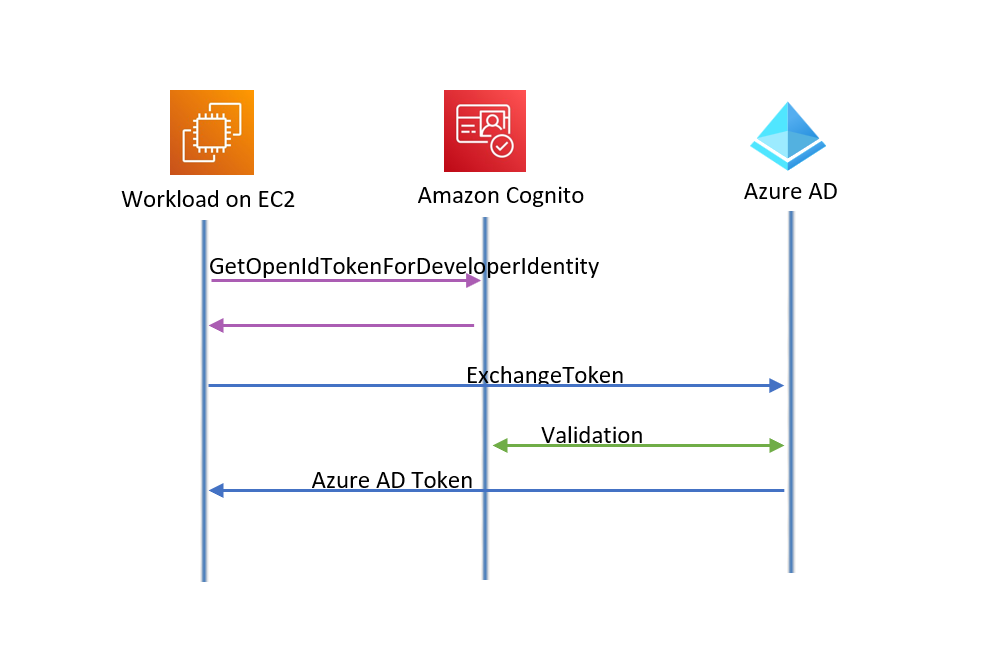 Since we are not accessing AWS resources using our pool, we don’t need to add any roles to Cognito.

The audience claim in JWT tokens is critical for security reasons. It contains the intended recipient of the token. Any service receiving a token must check it is the intended recipient of the token. To see why this is important, let’s consider a hypothetical example. Service-A needs to authenticate to Service-B and Service-C. If it uses the same token to authenticate to both services, Service-B can also use that token to act like Service-A when accessing Service-C. However, if the token had the audience indicating the token was for Service-B, then Service-C would reject that token since the intended audience is Service-B.

Azure AD workload identity federation is a capability that enables getting rid of secrets in several scenarios like services running in Kubernetes clusters, GitHub Actions workflow, and services running in Google and AWS Cloud. Stay tuned for many more use cases where this capability can help remove secrets.

If you have any comments, feedback, or suggestions on this topic, I would love to hear from you. DM me on twitter