Yes! Workload Identity Federation is now available in public preview on user-assigned Managed Identities too! This change makes it easier for developers to access Azure resources from their software services running in Kubernetes clusters or running in the Google cloud or from GitHub Actions workflows. There have been several blogs posted on this site, such as Kubernetes, GitHub and SPIFFE, which walk through using an Azure AD application registration to configure workload identity federation. This blog walks you through using managed identities instead of application registrations to enable those scenarios. 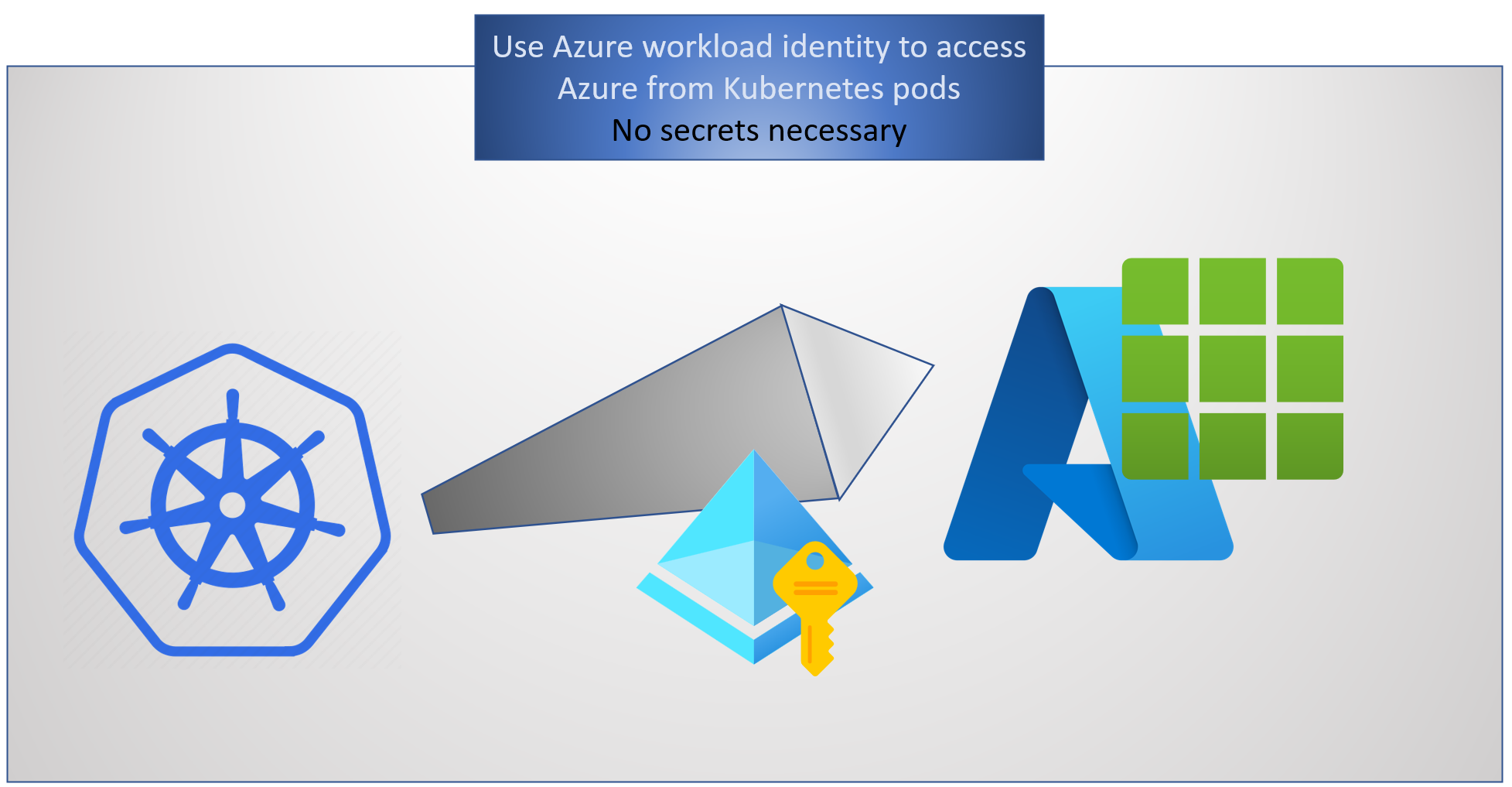 In this approach, the tokens issued by the Kubernetes cluster to pods can be used to request Azure AD tokens! 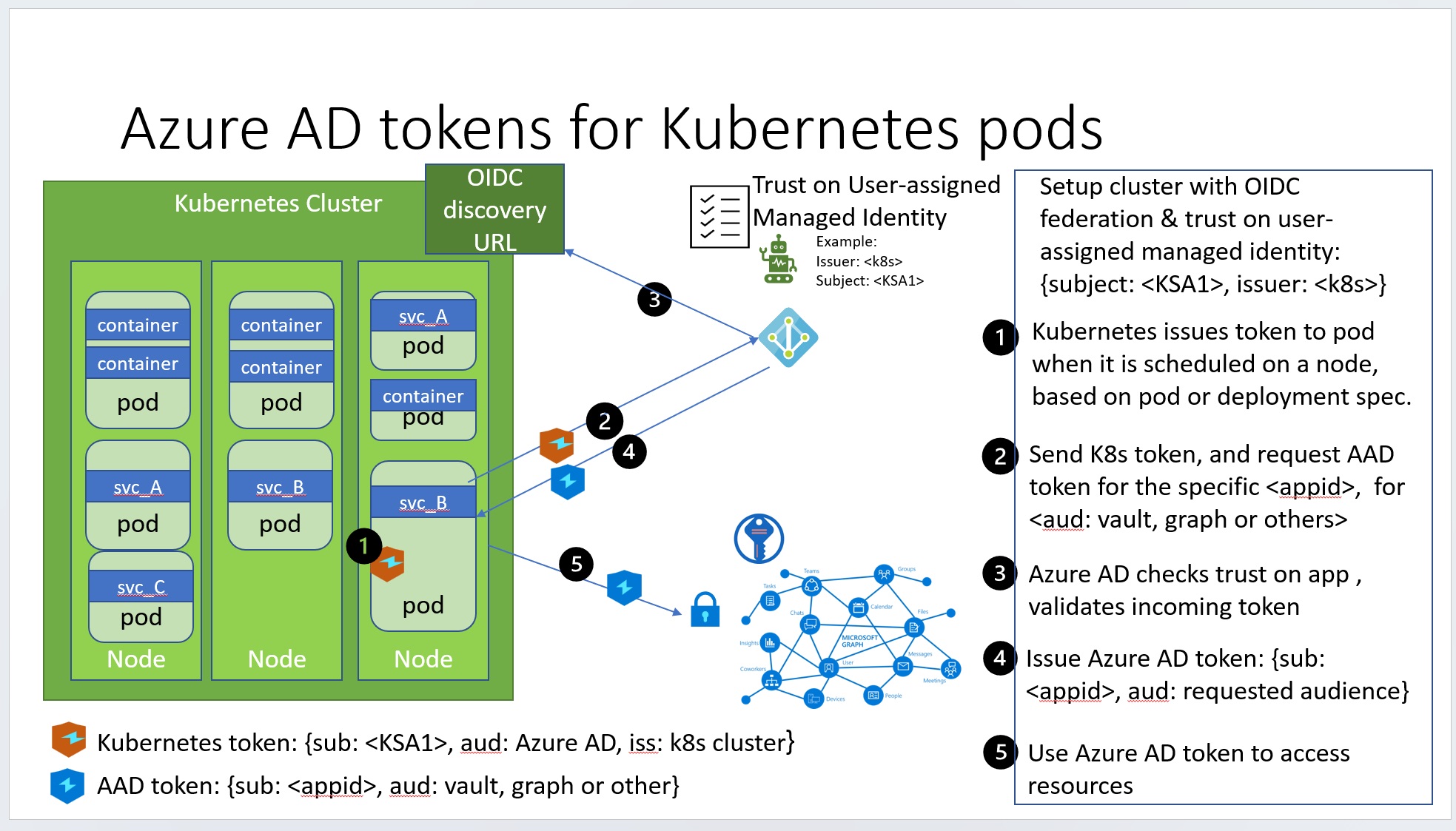 Quick primer: what are managed identities and why should you care about this new capability

Managed identities, on the other hand, were built with the developer scenarios in mind. It only supports the Client Credentials flow meant for software workloads to identify themselves when accessing other resources. Managed Identities also remove the need for developers to deal with the burden of secrets management, storing secrets securely and rotating them regularly. The secrets are managed by the Azure platform, simplifying the developer experience. This secrets management, however, came at a cost: you could only use managed identities for your software workloads running in Azure, for example, an Azure VM, Azure App Service, or Azure Functions.

First, you need to be able to create a user-assigned managed identity. You can achieve this if you have an Azure subscription and are in the “Managed Identity Contributor” role. You can then assign that identity with the necessary access to resources you own or manage, such as Azure storage.

You will need az cli version 2.40.0 or higher. And aks-preview extension 0.5.102 or later. You can check both of these using az version.

If you dont see aks-preview as an extension shown in az version, install the aks-review

To add a federated credential:

If you prefer the portal experience, you can also do this in the Azure portal, as shown later in this blog post.

Let’s walk through a concrete example, to give you an end-to-end picture for using this in different scenarios.

As mentioned earlier, you can use workload identity federation on user-assigned managed identities to access Azure resources. Your software workload can run in any Kubernetes cluster, such as AKS, EKS, GKE, or an on-premises cluster you manage.

Azure Kubernetes Service (AKS) has updates to support the federation natively, so let’s use that in this walk-through.

You can now create an AKS cluster with the federation and the mutating webhook discussed in our earlier Kubernetes blog post.

The enable-oidc-issuer will turn on the federation on the cluster and give you the issuer URL. You will need this URL to configure your federated credential on your user-assigned managed identity.

The enable-workload-identity will add the webhook. The webhook simplifies your configuration. When a pod is deployed on a node, the webhook automatically adds the config necessary to get the Azure AD tokens.

If you have an existing AKS cluster that is at version 1.21 or above, you can also update that cluster with this support as follows:

Once you have a cluster and know its OIDC issuer URL, you are ready to add a federated credential on your managed identity.

Here’s an example for my cluster using Azure CLI:

And here’s the expected output from a successful configuration of the federated credential:

Let’s take a look at how you can use the Azure portal to achieve the same outcome: First, go to your user-assigned managed identity in the Azure portal. Notice the “Federated credentials (preview)”.

When you select that, you will provide the scenario for this credential.

Selecting Kubernetes will allow you to configure all the specifics of your Kubernetes deployment. 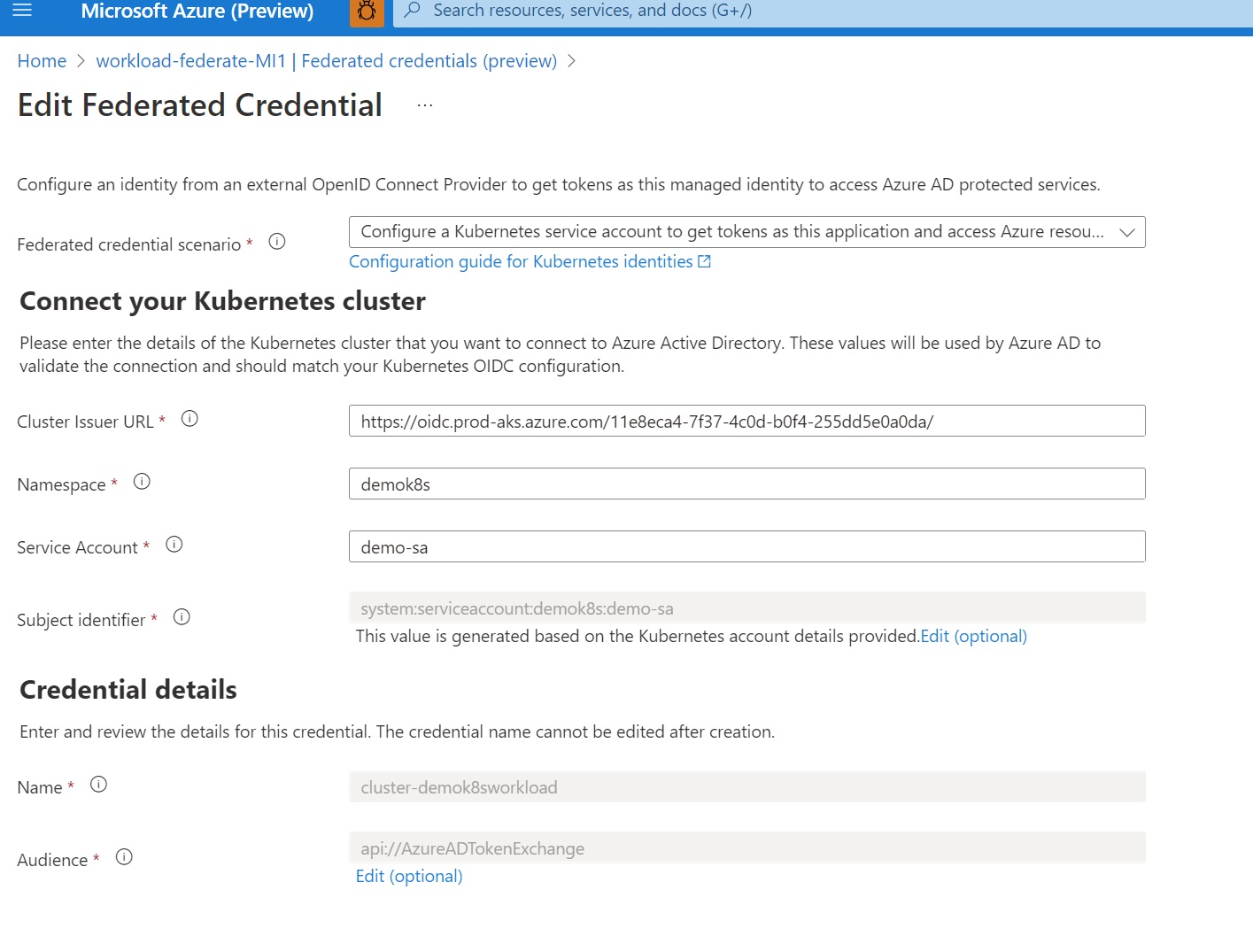 Getting tokens for Managed identities

The cool thing is, getting tokens for managed identities in this pattern is identical to getting tokens for application identities! All the samples you saw in the earlier blog posts work without any changes. The client-id that identifies the specific identity is the only thing that needs to change.

When using the azure identity SDK, you can simply use the DefaultAzureCredential for either application or managed identities. It uses the environment variables setup by the webhook (such as client-id from the annotation on service accounts) to determine which identity to get a token for.

User-assigned Managed identities now support Azure AD workload identity federation. This capability simplifies how your software workloads in Kubernetes, Google, or GitHub can access Azure resources without needing secrets! Stay tuned for many more scenarios where you can use this capability to get rid of secrets.

If you have any comments, feedback, or suggestions on this topic, I would love to hear from you. DM me on Twitter